Last year, we spent Easter with our twin nieces. It was their first Easter and it was a nice opportunity for us to spend a little time with them. This year, we spent Easter with our 6 year old nephew. We hadn't seen him in awhile, plus he recently went through an intense health scare.
Despite being on opposite sides of the family, these children have something very important in common: they are all our Godchildren. We take this role very seriously, and it is important to us to spend time with all three of them. That's not always easy, though, since none of them live incredibly close to us.
This distance makes spending time with them more than just a quick trip; it's an undertaking that must be planned in advance. My job requires that I request time off more than a month ahead of time. If something comes up unexpectedly, I often can't make it. When it comes to the children in my life, this inability to drop and run breaks my heart. 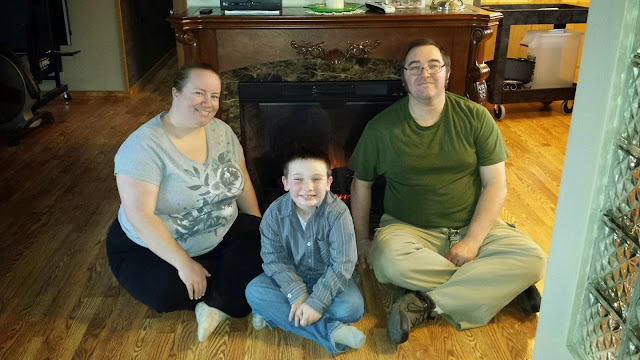 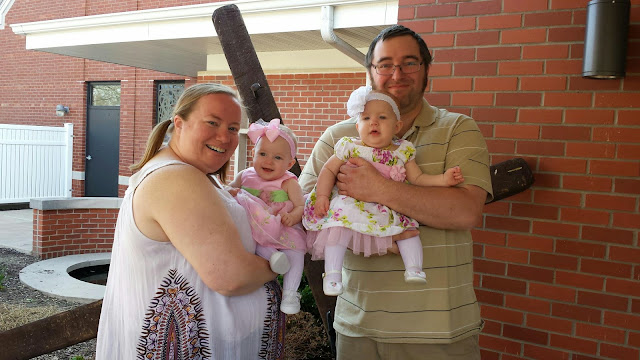 I'm finding that I really enjoy dying yarn.  If I could afford it, I think I'd try my hand at selling the yarn I dye.  However, it's not a cheap hobby, which is why I haven't done it much.  I'm sure I'd make my money back and more, but getting started is half the battle.  Anyway, on to this dying adventure.

This time, I used a method that involved freezing Kool-Aid into ice cubes prior to applying the color to the yarn.  These ice trays are new, and I discovered that there is such a thing as "too full" if I'm planning to stack the trays. 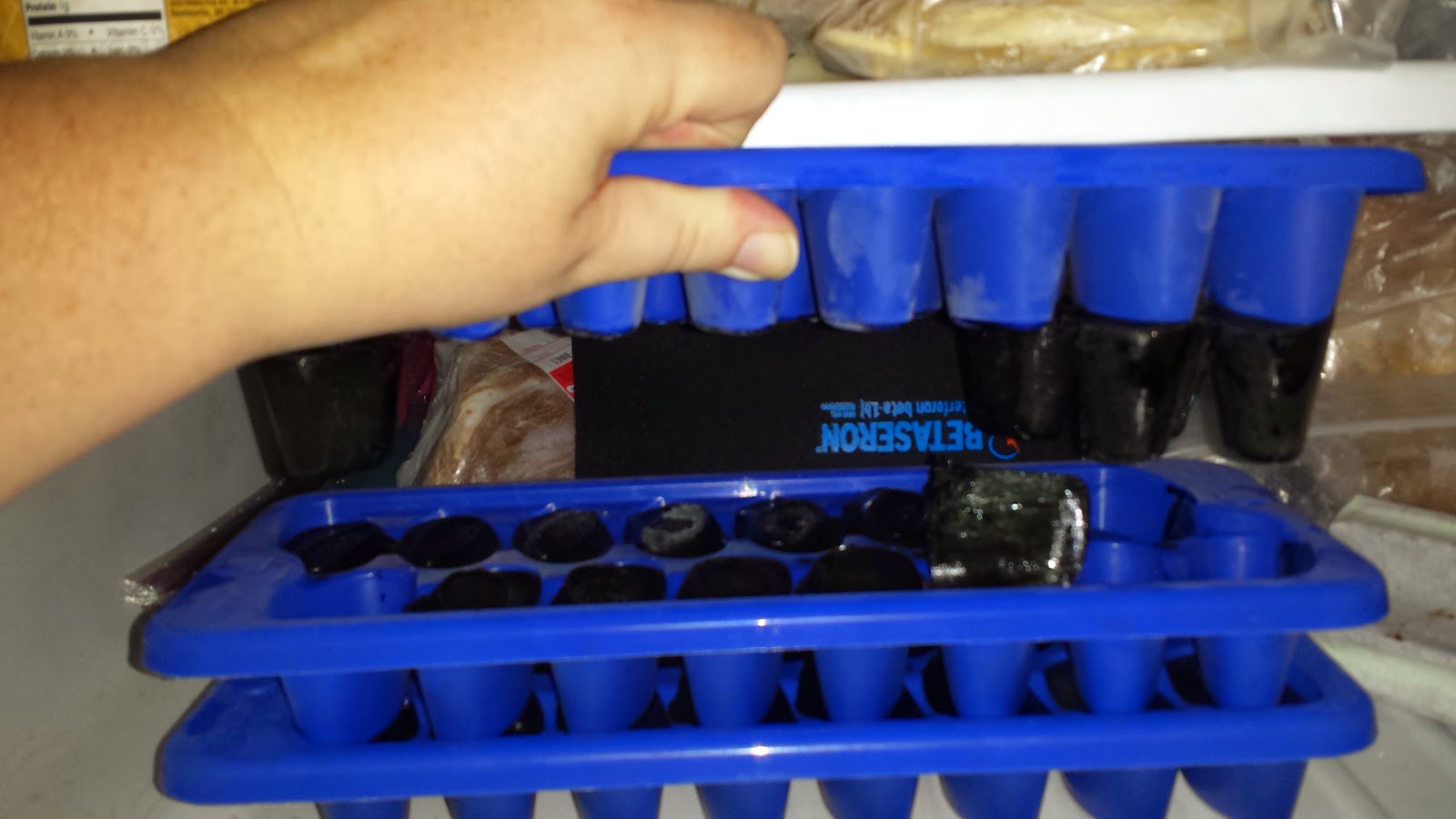 This led to me having to handle the cubes more than I had planned, which led to staining my fingers. 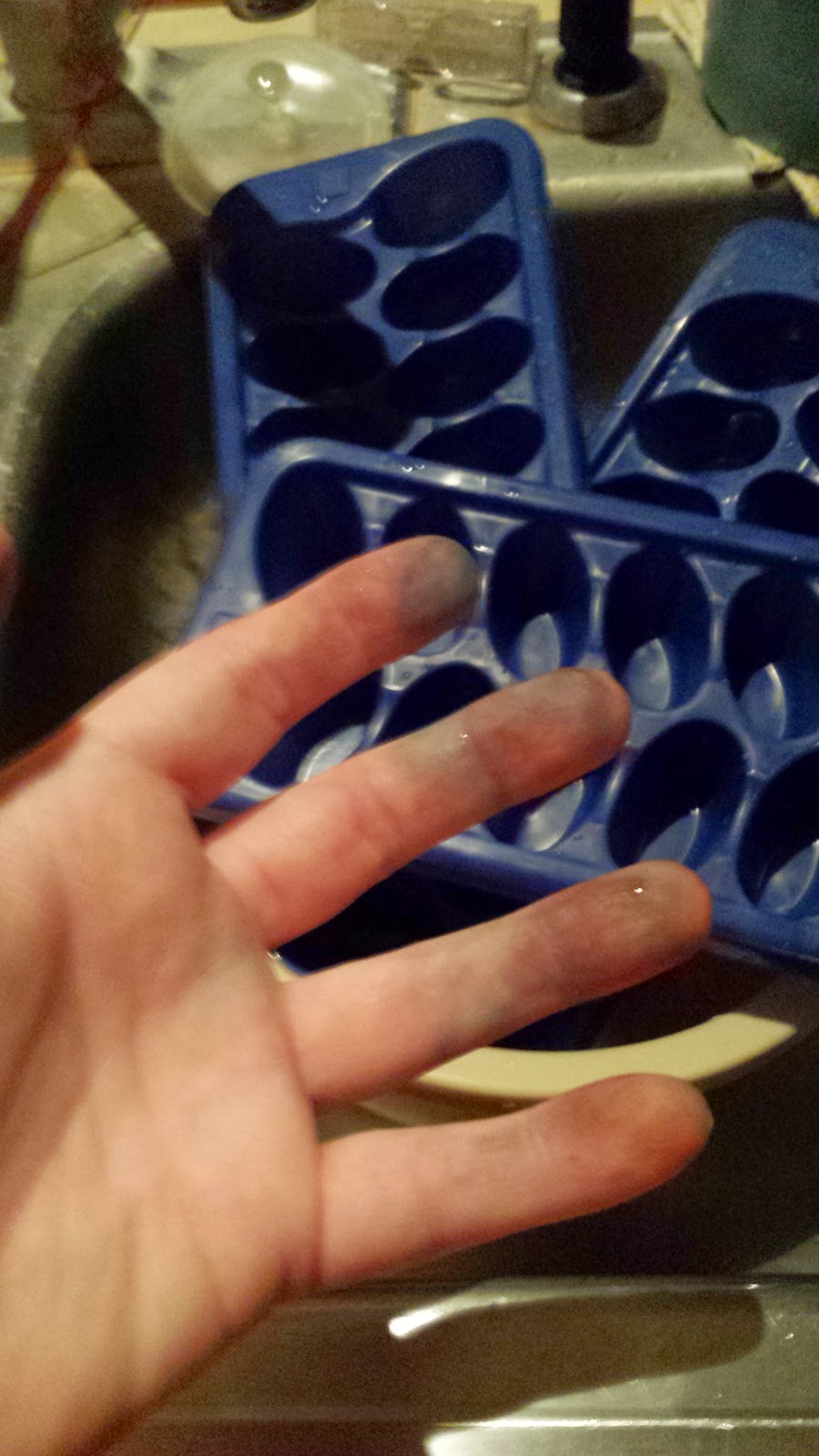 Thankfully, this only took a couple of days to fade completely.  Moving on - as usual, I soaked the yarn for several hours in water that had a few glugs of vinegar in it.  I just eyeball it. 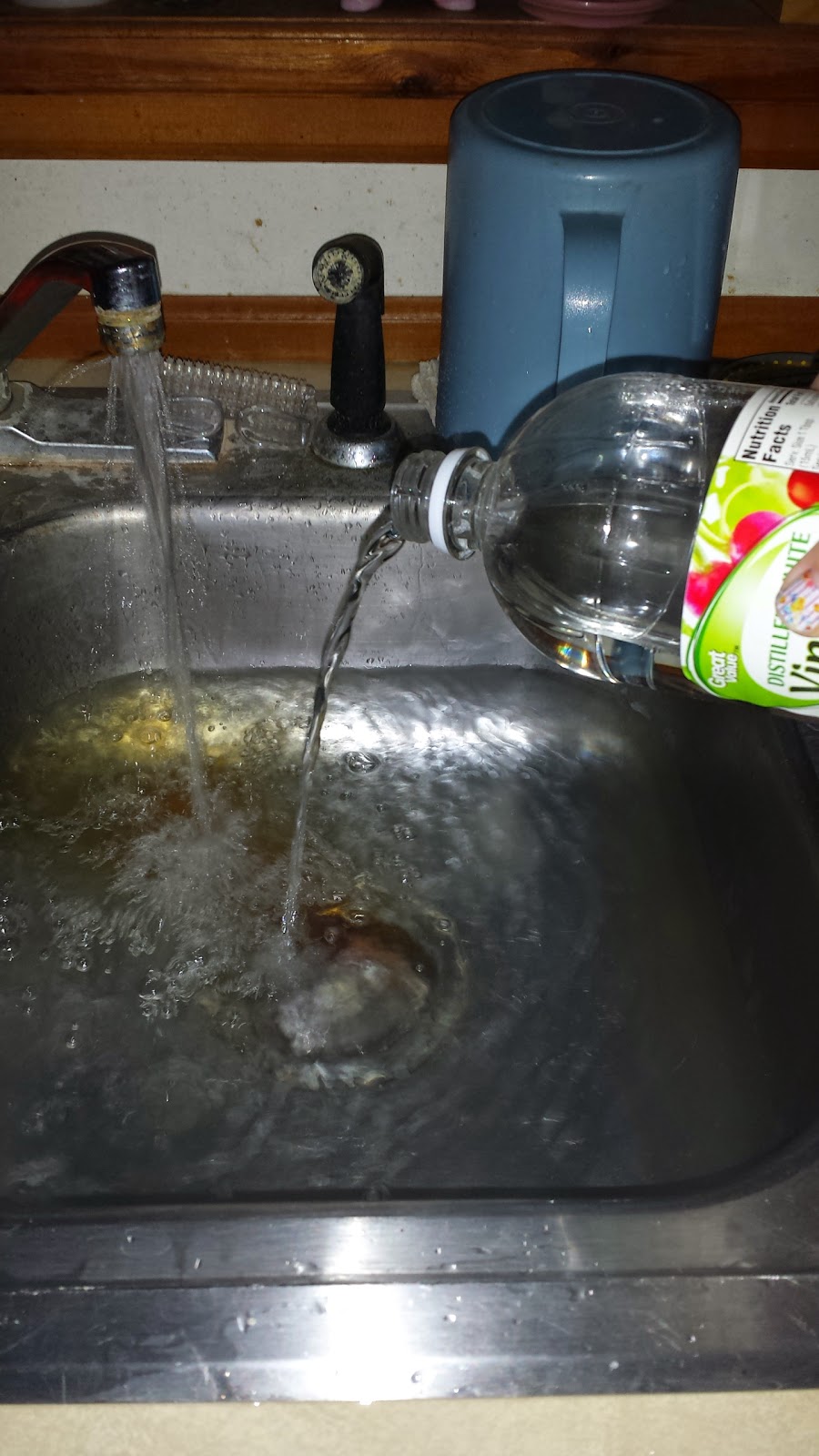 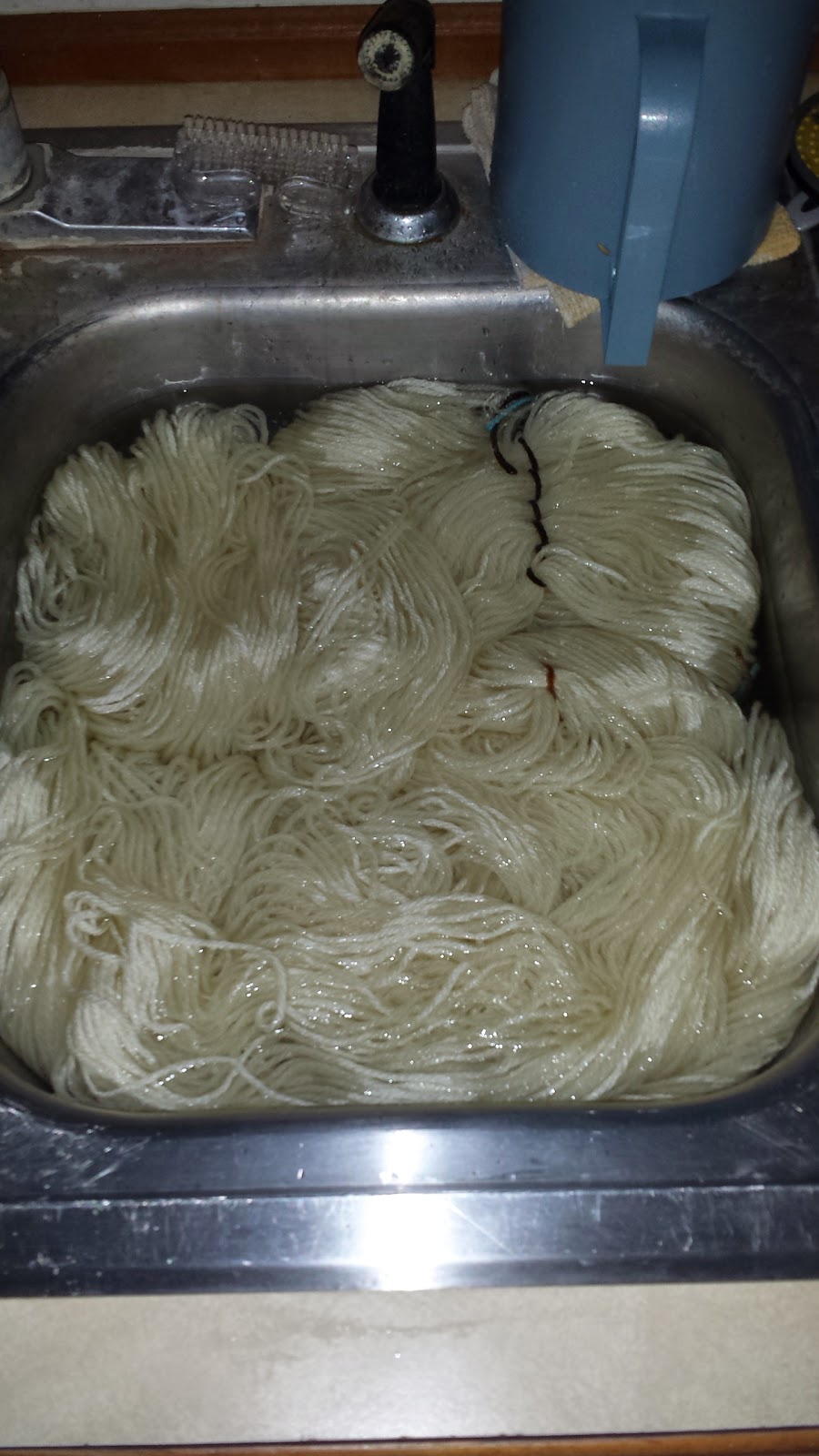 Once it had soaked I put it into a roasting pan and scattered the color cubes over the top of the yarn. 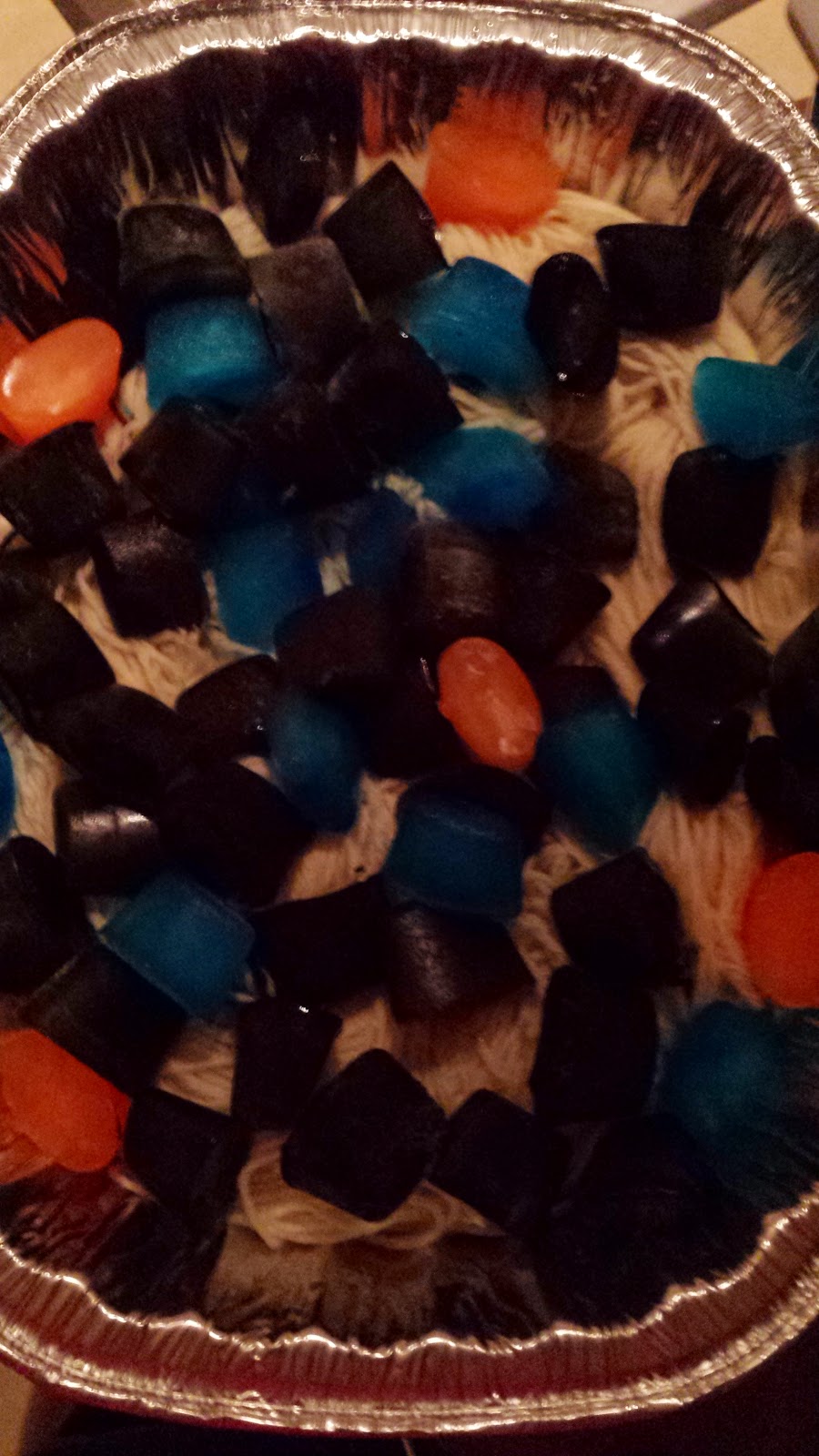 Then it went into the oven for 2 hours.

When it came out, it wasn't nearly as dark as I was expecting or hoping for it to be.  Therefore, I decided to give it another run through the system.  I got more Kool-Aid and doubled the concentration of Kool-Aid to water.  I also moved the yarn from the large roasting pan to a smaller glass pan. 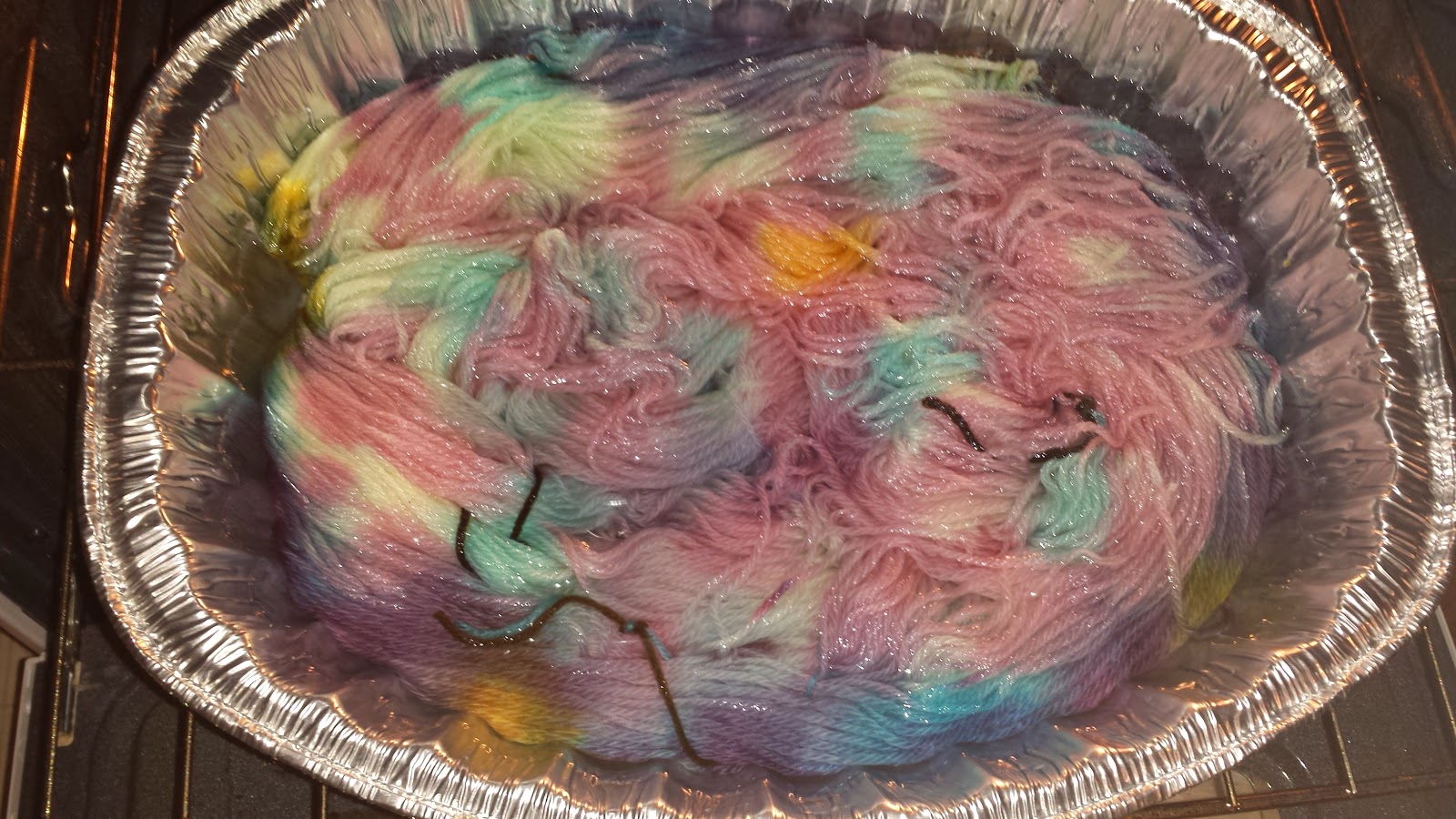 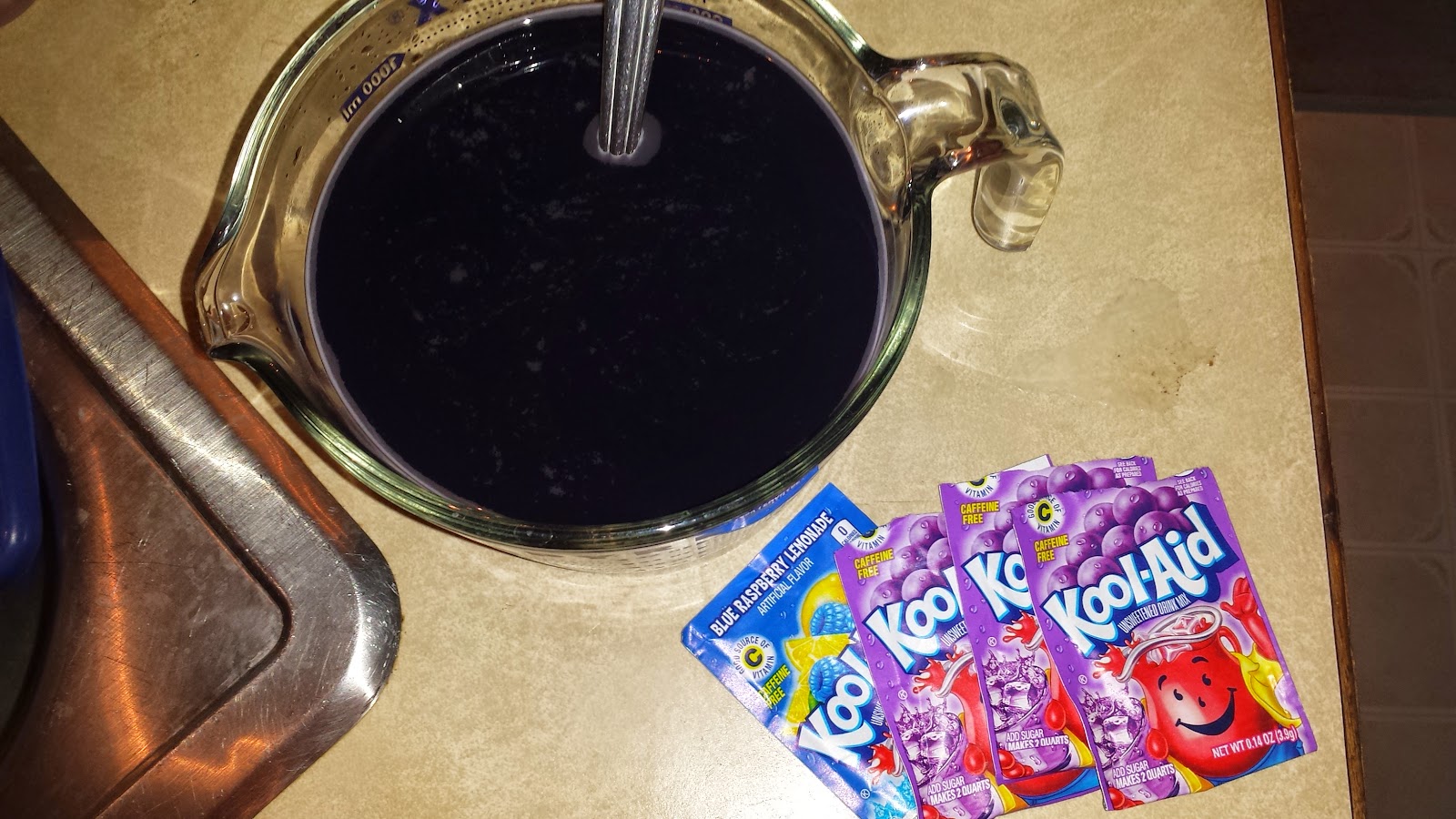 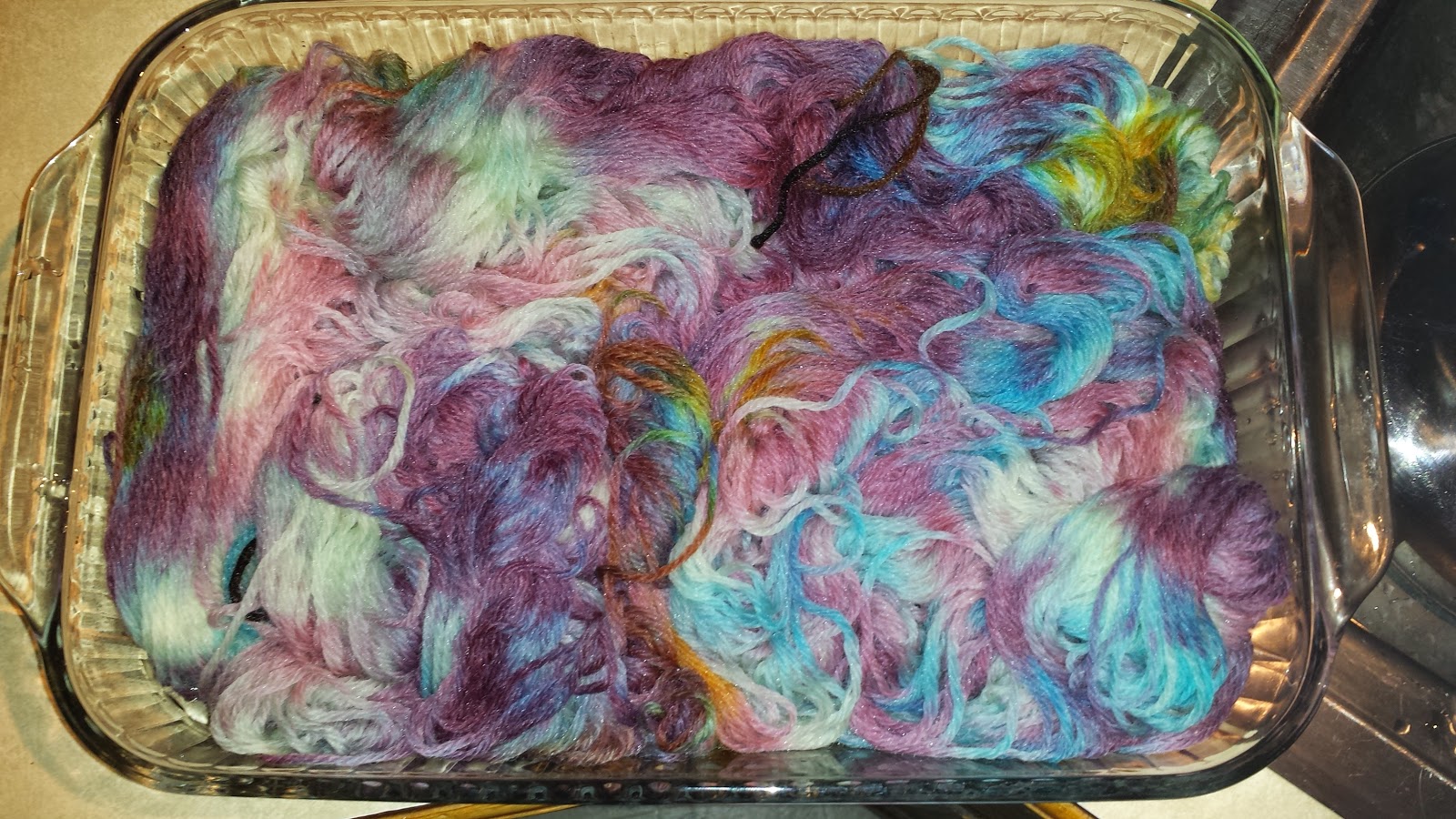 Rather than freeze this batch of dye, I just poured it over the yarn in the pan.  It made for a very full pan of yarn, so I had to be very careful when it came to transporting this across my kitchen.  Grape Kool-Aid stains. 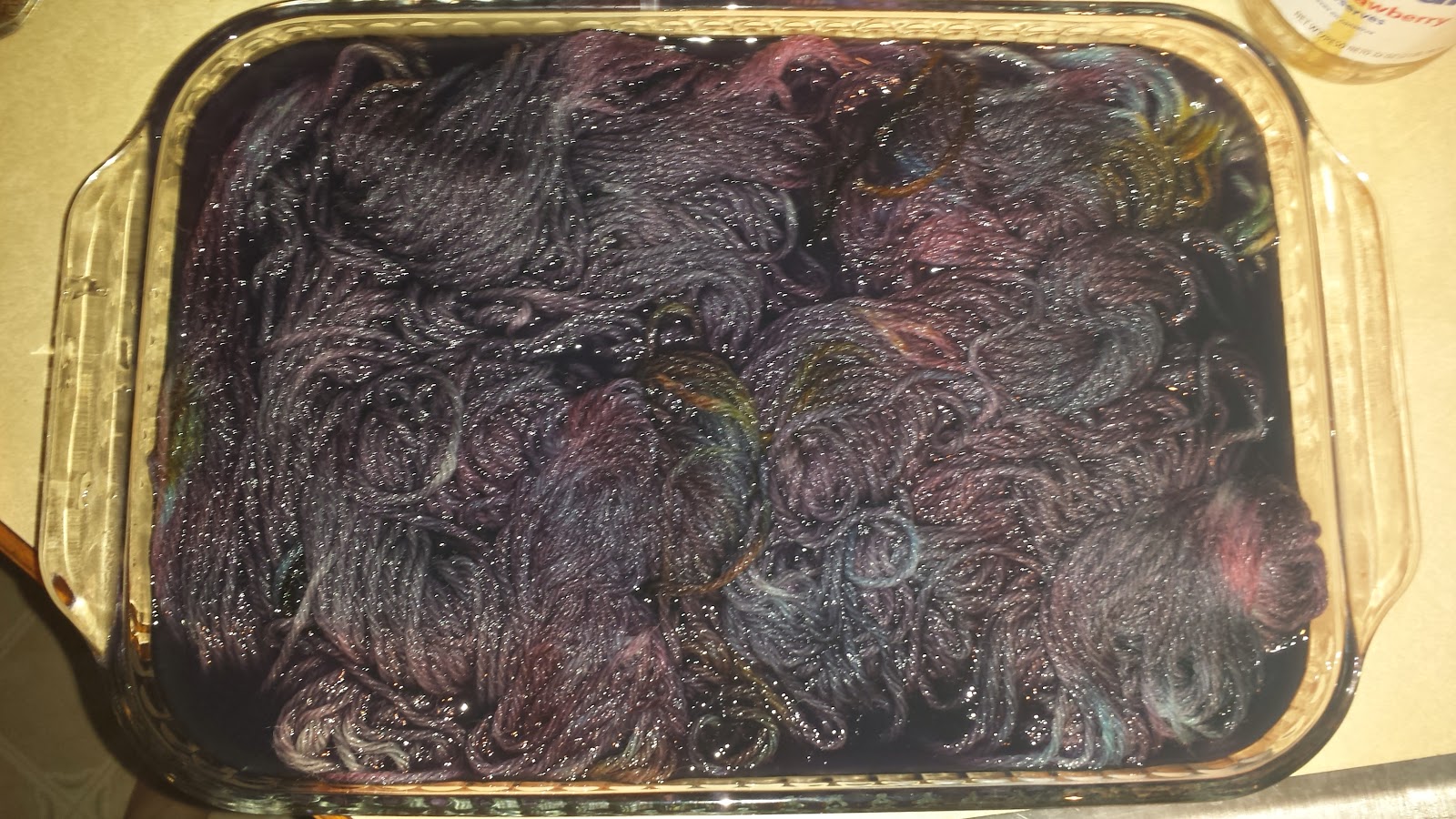 Back into the oven it went for another hour and thirty minutes, after which the color was much darker overall.  I checked to be sure that the water was now clear, then gave it a dunk in the sink to cool/rinse. 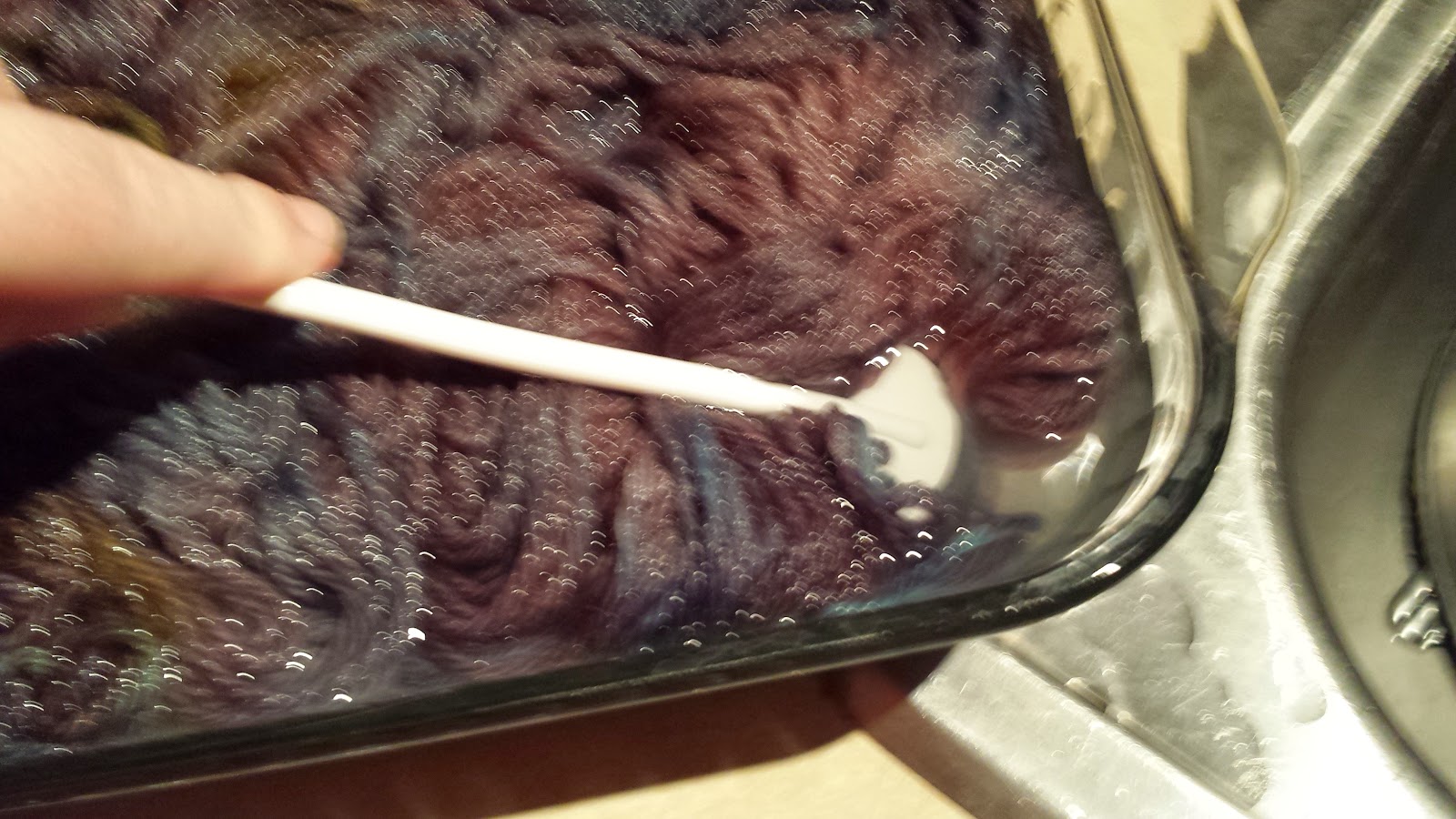 Then it was onto the drying rack in the bathtub.  Best place for something to drip dry - especially something that you can't wring out for fear of damaging it (wringing wet wool yarn can cause felting, which is great when you want it but terrible when you don't - and I don't, at least not for this). 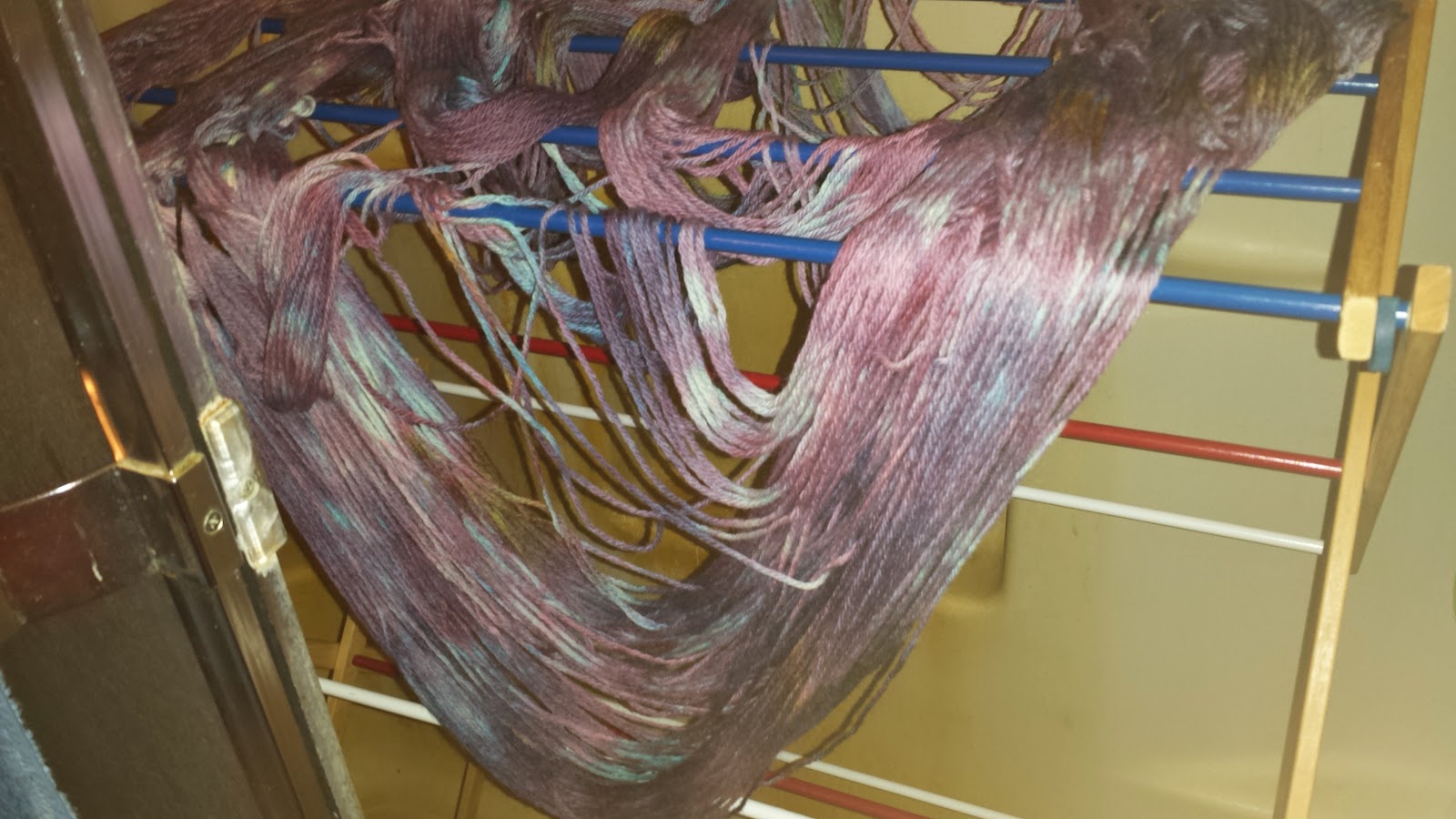 The next day, it was dry and I twisted it into a hank.  Finished!! 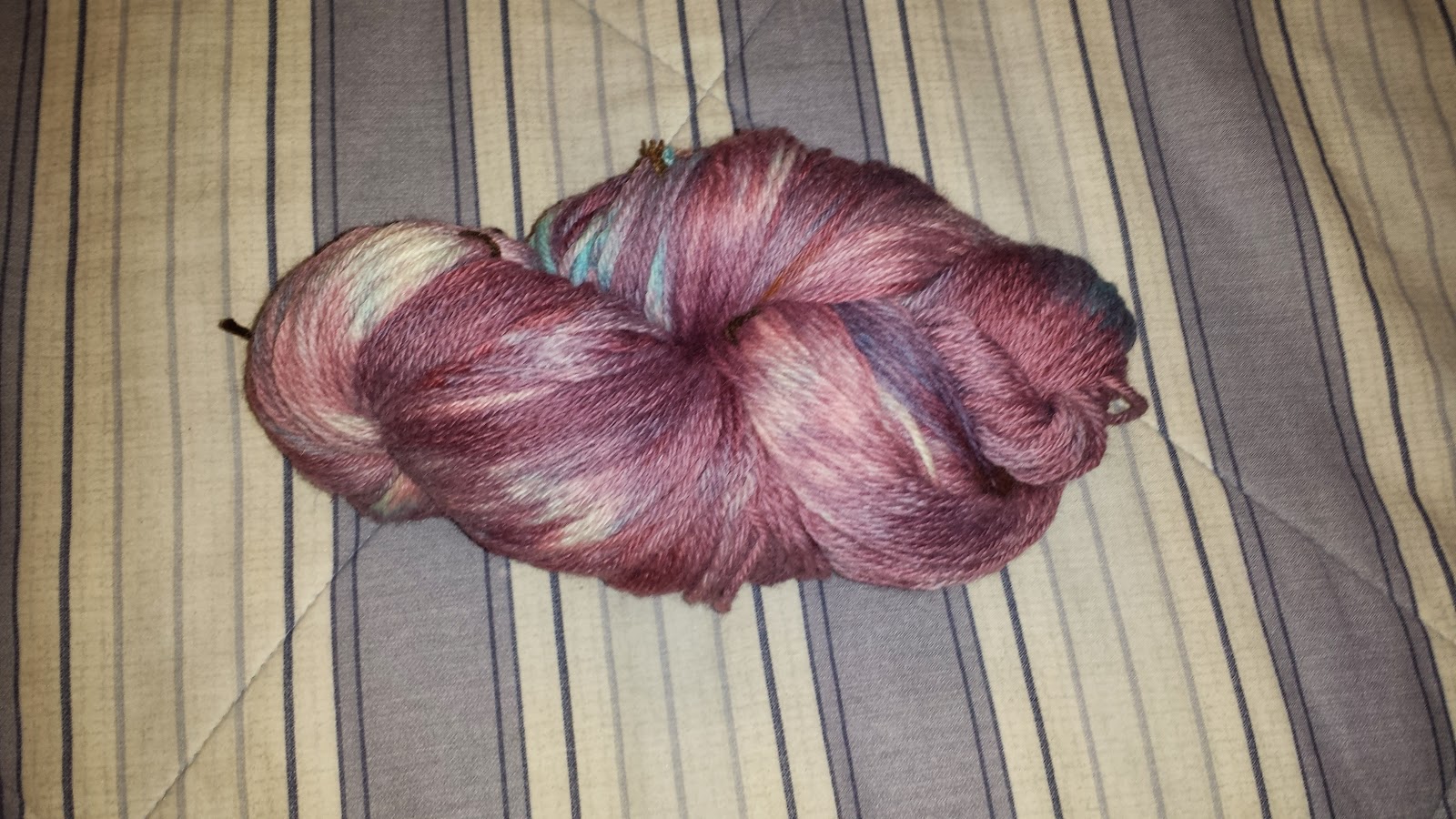 This morning's visit to the scale was rather depressing.  So much so that I'm not even willing to post the number on my blog, and I'm usually pretty open about the number.  I feel that publishing the number gives people a way to see how things are going.  Well, today I'm going to leave it at, "They're not going well."

I recently read something about the concept of intermittent fasting, and I'm thinking of giving it a try.  There is some deprivation involved (after all, no diet is without it), but it's not as restrictive as most.  I'm still trying to decide which version of the diet I'm going to try.  There is one where calories are restricted, and there is one where time is restricted (as in, you only eat within a certain time frame, usually 8 hours in the middle of your day).
Posted by Sara at 1:40 PM No comments:

Well, it's been a year since I posted, and much has changed while everything seems the same.  I'm going to get back into blogging slowly, so today's is a crafty post.

I'm working on a Crochet-A-Long (CAL) on Ravelry.  We're making blankets/afghans that are crazy quilts of colors and patterns.  Each person's is inspired by a single pattern, but each of us is making a very different blanket.  Here is the beginning of mine:

I started with 5 rows of hdc:

I rolled it up and it made a nice little roll (little being relative - it is about 5 inches across at the longest point).  This roll makes it easier to transport and less likely to tangle among itself.  It's approximately 10 feet long.

Next I did a chevron section.  It went well in the main pattern section, but the edges came out a little wonky.  There will be more chevron sections, so hopefully I can figure out my edging by then.

Here's a look at the edge.  Ideally, I want the greens to be equal and the purple to be no larger than its role in the rest of the segment.  Obviously, that didn't happen in this case, but it didn't bother me enough to make me pull it out and start over.

I haven't done one of these in a while, but I saw it in my email and decided to have a go at it.
Another fun week of free association from http://subliminal.lunanina.com
Posted by Sara at 1:19 AM No comments:

I am brand-new to a gluten-free lifestyle.  I'm not new to the idea of it - 10 years ago as a student teacher I was impressed by a preschooler turning down a cupcake because she knew to ask whether it was gluten-free before eating it (and as it was only the 3rd day of school, us student teachers had not yet been made aware of her Celiac Disease).  I have since met a couple of other people who have Celiac Disease, but I never dreamed it would hit me.

Then a few random things happened.  One was getting my gallbladder out a few years back.  After that, I noticed that I was having problems processing fatty foods, which my doctor said is normal since the gallbladder helps the body to process fatty foods.  As time went on, things got worse.  I thought it might be a dairy issue, but I then started to notice that eating just cheese did not bother me, but eating pizza and pretzels made me ill.  Rather than get any testing done, I chose to do an elimination diet to check for myself.

November 1, 2012 I went gluten-free.  I have had some problems with hunger (I usually eat a sub or other type of sandwich for lunch - without the bread I'm much less full) but overall I am feeling MUCH better.  More energy, almost no GI issues.  Today I decided to test it.  I had a cheeseburger for lunch - with the bun.  Within an hour I felt terrible.  Tired as if I hadn't slept in a month, spent over an hour in the bathroom, gassy, feeling very nauseated.  I had to miss Stitch & Bitch tonight because I was afraid to be that far from a bathroom (it's a 45 minute drive there & back).

I guess that answers that question.  No more gluten for me - even a little bit.  I'm now on the hunt for gluten-free recipes and ingredients that are affordable so that I can have the bread-type foods that I love without having to feel sick for several hours afterwards.
Posted by Sara at 8:18 PM No comments:

This morning I participated in a 5K on the campus of Central Michigan University.


Originally, I had planned to train with the C25K program and run this particular race.  As it turned out, training got sidetracked by several factors and I was not able to run.  That means I walked the race.  I did not push myself as hard as I could have, but I am told that I helped to push my friend Deanna hard enough to make her go faster than she would have on her own.  I started the race with two friends, Deanna and Adrienne.  Adrienne set her own pace that was faster than Deanna's.  Had Deanna not been there, I would have pushed myself to keep up with Adrienne.  As it turns out, Adrienne finished about 10-15 minutes earlier than Deanna and I, and we finished the race at 54 minutes, 25 seconds (or thereabouts - the time was started before we crossed the Start line, and I didn't see the clock until we had been finished for about 20 seconds, so I subtracted for the 20 seconds but not for the distance to the Start line).  Official times will be posted on Monday.

This particular race was a Duathlon, meaning that racers had the option to do a bicycle race after finishing the 5K.  I know myself and know that I am in no way in shape for a bike race.  Additionally, my bike is in no shape for a 20 km bike race.  Maybe next year!

Click here to submit my news to the LFCA